Africa is Ripe for a Strong Hindu Future

Swami Ghananandji Saraswati
Western faiths are long embedded in Africa. Christianity came first through traders. They were followed by missionaries who opened schools and hospitals and formed societies for the propagation of the gospel, thus making Christianity deeply rooted on the continent. While Christians advanced from the coast inland, Islam came by conquest from the North. Because of the heterogeneous nature of African societies--each region and society having its own beliefs and aspirations--most traditional religions collapsed under this intense pressure from Christianity and Islam. While Christianity and Islam were expanding and getting the main hold on the African continent, the few Indians who arrived were merchants and workers interested purely in their businesses, not in portraying Hindu lifestyle. Today very few Indians in Africa live by Hindu tenets. Through their long severance from India and living in the diaspora, many have lost touch with their true culture and way of life. However, in a few places, like Accra, where I live, the Indians have a cultural center where they meet, discuss and worship. As a result, they have maintained their cultural identity. But because Christianity and Islam earlier gained such strong roots in Africa, Hinduism has hitherto had little or no impact.
The Indian community mixes little with other Africans. They tend to be inward looking and share only with Indians, rather than sharing the best things about Hinduism with Africans. As a result, Hinduism has a very low profile in Africa today. A few people have read aspects of Hinduism from books and practice Hinduism under the cloak of secret societies.
African religions and Hinduism have certain similarities. Traditional African religions recognize the many aspects of Brahman and worship God as Prithivi, Vayu, Varuna, Agni, etc., just as in Hinduism. Only Africans who have been exposed to Hinduism can appreciate these similarities which help them to better understand African beliefs and aspirations. In Africa, Christians and Muslims alike who want self-development and self-realization turn to Hinduism. When they do, most of their friends and relatives shun their company out of ignorance, misconception and misinformation. However, invariably they soon observe changes in the lives of these Africans and may even also switch to Hinduism.
No Indian swami made such a great impact on the African community as H.H. Swami Krishnanandji Saraswati (1899?1992), described as the "Swami of Africa." Swami belonged to the unbroken tradition of great souls who came to this ephemeral world with the eternal message of love and peace, of the divinity and brotherhood of man, of the virtue of selfless service and sacrifice. These great souls are the makers of civilization. They enrich culture. They create values and establish norms. They do not write history, but create it.
Krishnanandji looked upon selfless service as the essence of all religions' teachings. His life's motto was, "Service to man is service to God." He led the ascetic life of a Hindu sannyasi for over half a century, serving helpless, aged, crippled and sick people. He organized salvage operations and relief work for the benefit of refugees, war victims, riot sufferers, forsaken victims of droughts, floods and mass human exodus in numerous African countries, including: Togo, Nigeria, Gambia, Kenya, Zambia, Zimbabwe, Mauritius, Rwanda, Sudan, South Africa and many others, bringing health, sight and spiritual upliftment to the black peoples of Africa. He brought Hinduism to black Africa by initiating the first African into the holy order of sannyasa in the person of myself as "Swami Ghanananda Saraswati" in 1975. To support his good works, Krishnanand established the Hindu Monastery of Africa under my direction in Accra, Ghana.
In our lifetime, one of the prominent sages we have been blessed to see is Mahatma Ghandi, and to him we owe our freedom in South Africa. Since South Africa was the venue of his early formative years, his system of passive resistance had quite an impact on Nelson Mandela's peaceful struggle to topple the white apartheid regime. Mandela is a man of wisdom. He must have thought, if Gandhi's system succeeded in India, which is about ten times the size of South Africa, why will it not succeed in South Africa?
I believe that Hinduism will grow with time among both Indians and Africans. It is now time for India and Hindu masters to turn their attention to Africa, with swamis and brahmins coming to conduct workshops, etc., and thereby give Africa a chance to remove the veil of spiritual darkness that has given Africa the name "the dark continent." Other areas which will attract black Africans to Hinduism will be the establishment of schools, clinics and the promotion of social work and institutions of service. Hinduism, alongside other religions, must help in harmonizing the efforts of all religions to foster the needed peace for both material and spiritual development of the continent. Africa is still a poor continent, and what it needs are programs that are aimed at reducing hunger and poverty on the continent. India can place at the disposal of Africa its vast knowledge in agriculture and light industrial development which has made India today self-sufficient.
My advice to Hindus worldwide is that the Satguru will lead you through no darker rooms than he himself went through before; for he that comes into God's kingdom must enter by this door.
SWAMI GHANANANDJI, 61, was initiated by Swami Krishnanand of India in1975. He heads the Hindu Monastery of Africa in Accra, Ghana, regularly imparting spiritual guidance to devotees
at 21:29

Hinduism growing in Africa without Proselytizing Interestingly, Hinduism is the fastest growing religion in Ghana.  And no one is inv... 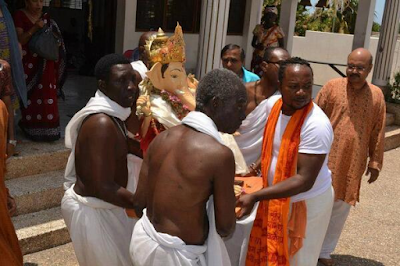